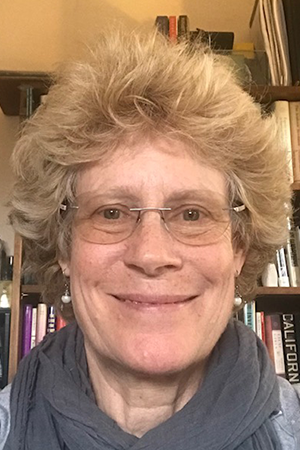 Dr. Sara Lundquist was an employee of Santa Ana College (a community college serving 25,000 credit and 18,000 non-credit students in Southern California) for 39 years, serving as Vice President of Student Services at the college and leading the Santa Ana Partnership, a K-12 and higher education collaborative with local community and civic leaders, parents, and business representatives.

She co-led systemic reform initiatives at the college that resulted in the creation of fully funded pathways from K-12 to the B.A. regionally through CSU Fullerton and UC Irvine. She led the student equity work at the college and founded its first dedicated research department, whose reports drove an equity-centered revolution in developmental education encompassing English, math, and English as a Second Language pathways.

Sara was hired by Lumina Foundation in 2017 to help launch its Talent Hubs initiative. In this role, she supported Foundation leaders and 26 regions across the U.S. that were designated Talent Hubs and helped to design and launch a national learning community of expert practitioners and stakeholders dedicated to increasing college attainment and closing equity gaps. She worked especially closely with CUNY (a designated Talent Hub) and has helped college teams build on their substantive foundation of equity-centered learner innovations to build micro-pathways to high-demand, middle-wage jobs since March 2021 as part of the Education Design Lab’s Community College Growth Engine Fund.

In 2011, she was appointed by President Obama to the White House Commission on Educational Excellence for Hispanics, where she helped to craft and vet policy proposals for the Department of Education related to FAFSA, student financial aid and debt forgiveness, and the structure of subsidies for MSI’s, a position she held through the remainder of the Obama administration.

Sara received her undergraduate education at Vassar College and the University of Pennsylvania, her master’s degree at the
University of La Verne, and her Ph.D. from Claremont Graduate University.

She has also been an adjunct professor of higher education history and policy at the University of California and the California State University.

She founded Lundquist Educational Strategies in 2017 and maintains offices in Santa Ana, California, and Seattle, Washington.