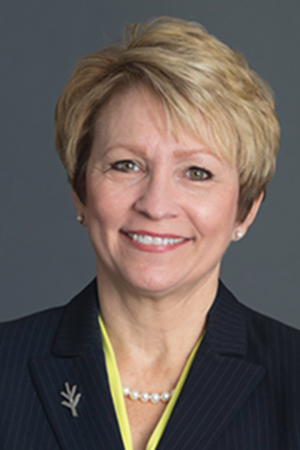 Dr. Sue Ellspermann became President of Ivy Tech Community College on July 1, 2016. Ivy Tech is the largest singly accredited statewide community college in the nation serving nearly 100,000 students a year and another 60,000 via dual credit in high schools. The College has 19 campuses across Indiana and 40+ instructional sites along with a robust
catalog of online offerings.

Prior to that she served as Indiana’s 50th Lieutenant Governor from 2013 until March of 2016. As the vice chair of the Indiana Career Council she led efforts to align Indiana’s education and workforce development system to meet the needs of employers which is her continued focus at Ivy Tech. Her public service began in 2010 when she was elected as the State Representative for District 74.

Ellspermann was the founding Director of the Center of Applied Research and Economic Development at the University of Southern Indiana and also owned and operated Ellspermann and Associates, Inc, an independent consulting firm licensed in the training and facilitation of Simplex Creative Problem Solving.