Employer Validation: Working with the T-Profile

We’re working with employers to identify the core combination of 21st century and technical skills needed for specific job roles and using the concept of the T-shaped learner to capture employer insights. We call this visual demonstration of skills a T-profile. We have also used the T-profile with  individual learners as an alternative to the resume to demonstrate their skills and institutions to align curriculum with specific job roles.

The T-Profile is a visual construct that represents the optimal combination of 21st century skills and technical skills for a specified job. It demonstrates mobility up and across career ladders, making explicit the range of motion of different skill sets. When we work with employers, we often ask them to fill-out a T-Profile for each role they have either a high need for or those that are hard-to-fill. Employers use a shading system to identify which 21st century skills are most critical for the position, followed by a ranking of the most important sub-competencies (the darker the shading of the sub-competency, the more critical the skill).

The Lab defines 21st century skills as the non-technical, transferable skills that are needed for someone to thrive in today’s workforce. After three years of research and development, the Lab identified eight of these skills, along with their sub-competencies, most valued by employers. These eight skills are reflected across the top of the T and align to the Lab’s micro-credentials. 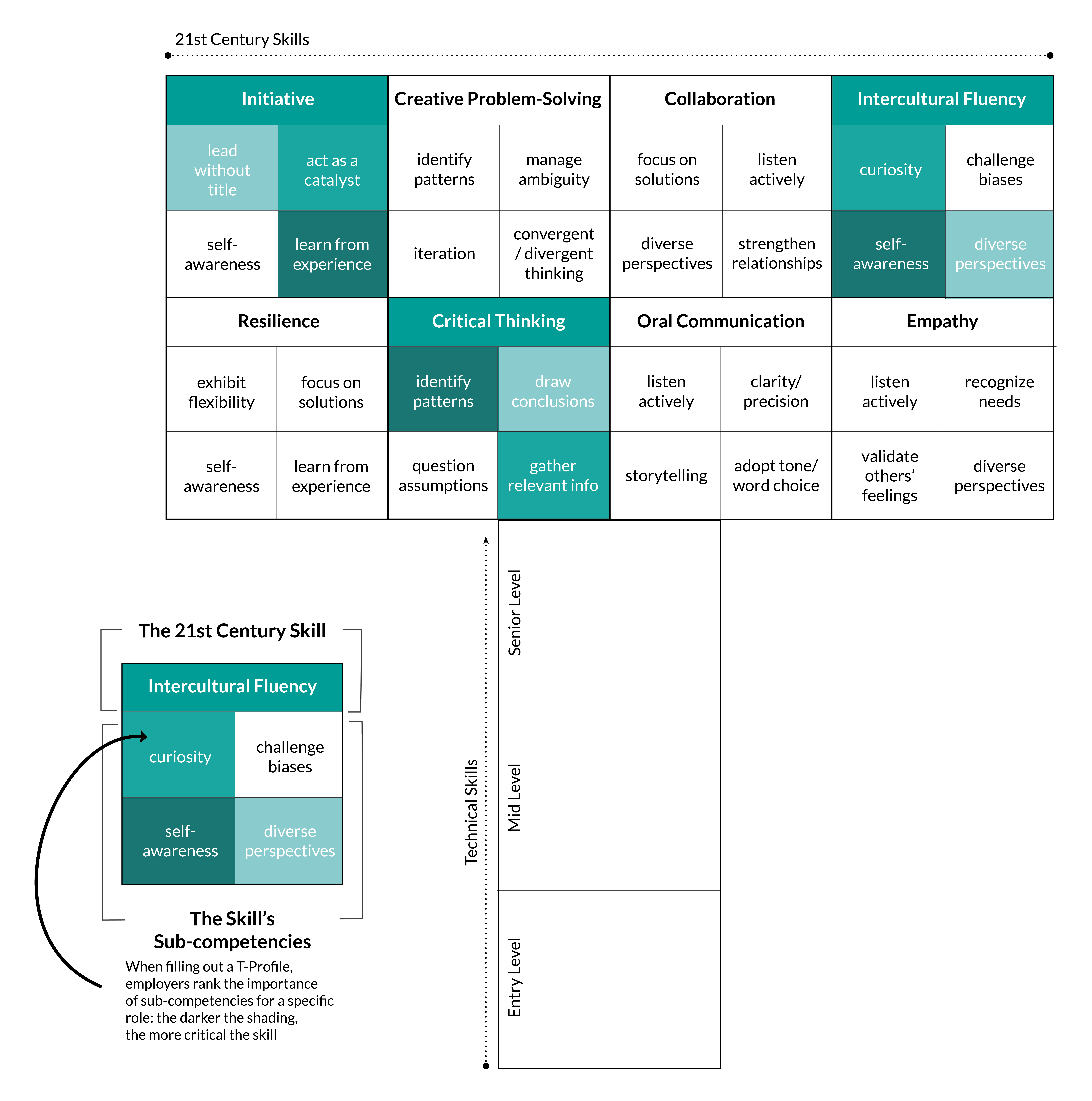 How We Use the T-Profile

As a Skills Map

Every job role has an optimal set of technical skills associated with it. Once considered “nice to have,” 21st century skills are now just as important to be agile in a rapidly changing economy, even more important depending on the role. Unfortunately, this combination of skills is not always reflected in a job description. The T-profile is an effective template and forcing mechanism for employers to identify the right combination of skills for a specific job role. A completed T-profile can be used as a curriculum or program map for precise alignment  or even a personal map for individual skill building.

As a Communication Bridge Between Employers + Institutions

Conversations between employers and institutions have advanced only marginally, in spite of improved technology and tools to connect employers to schools and learners. The skills gap persists and frustrations about the talent pipeline mount. The T-profile  allows employers to be honest and precise about the ideal combination of skills they are seeking for specific job roles (in a way that is not articulated in a job description) and institutions to understand exactly what they are looking for and can do to prepare learners. As simple as it is, the T-profile opens the door to meaningful, transformative conversations between employers and institutions—the types of conversations that are needed to close the skills gap.

Our on-the-ground work directly with campus recruiters and hiring managers across the country has demonstrated the deep complexity and individual differences associated with hiring, particularly at the entry-level. The T-profile has helped reveal interesting trends, however. There appear to be key clusters of 21st century skills for certain job roles on which multiple employers can agree. The Lab is continuing to gather T-profiles to explore this trend further.

We’ve created a library of 120+ T-Profiles collected from our work with employers, made available on the Lab’s new visible learning platform, vsbl. 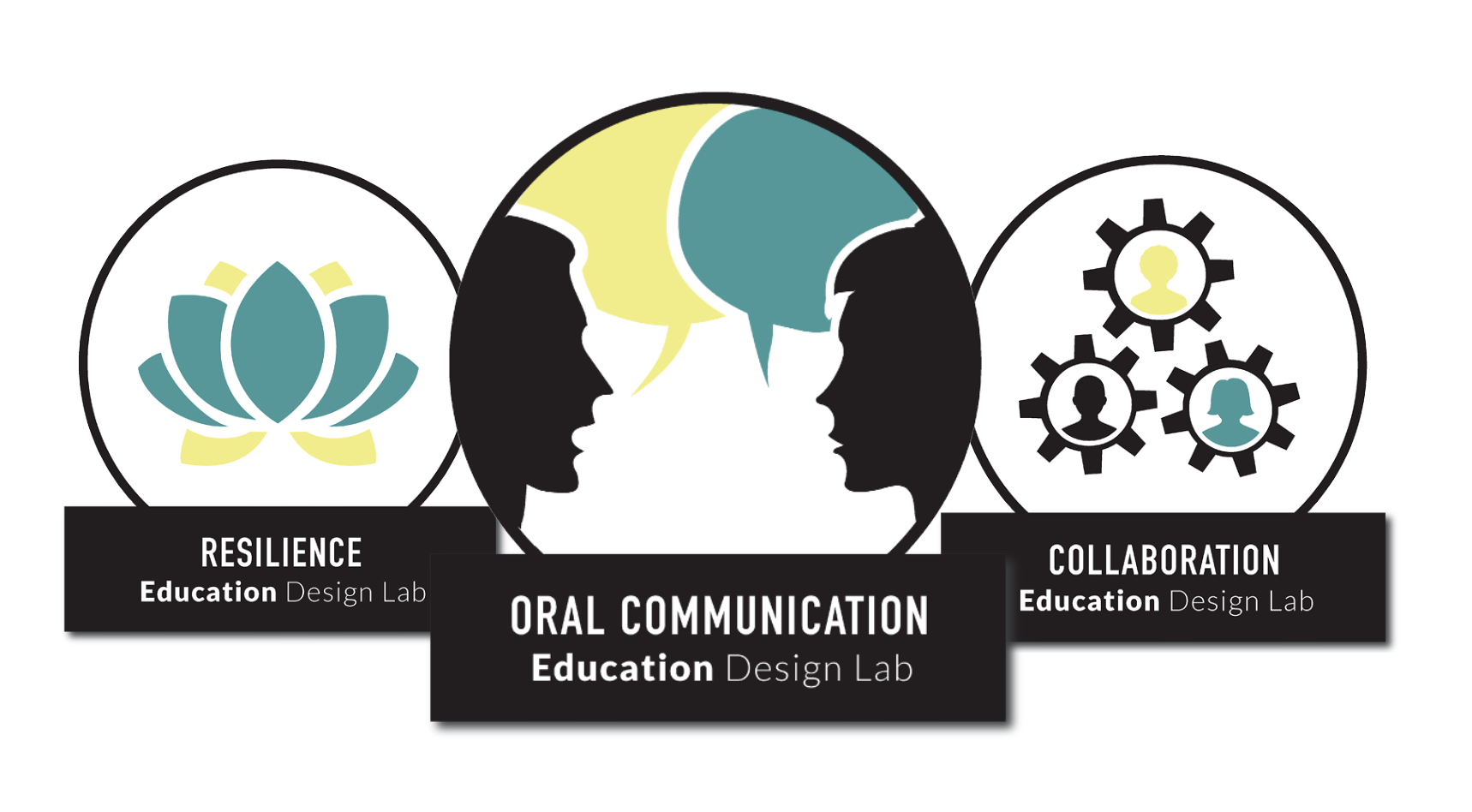 What is a 21st century skills micro-credential?

A 21st century skills micro-credential, also known as a digital badge, is a credential for a core 21st century skill—we sometimes call these power skills, mobility skills, or soft skills—like collaboration, critical thinking, and creative problem-solving. Think: What if…?

Co-designed with 20 colleges and 60 employers, our eight 21st Century Skills Micro-credentials target the most in-demand universal skills in the emerging job market of the future, complete with facilitator training.

Join our Innovator Network + never miss an update on our micro-credentialing work.