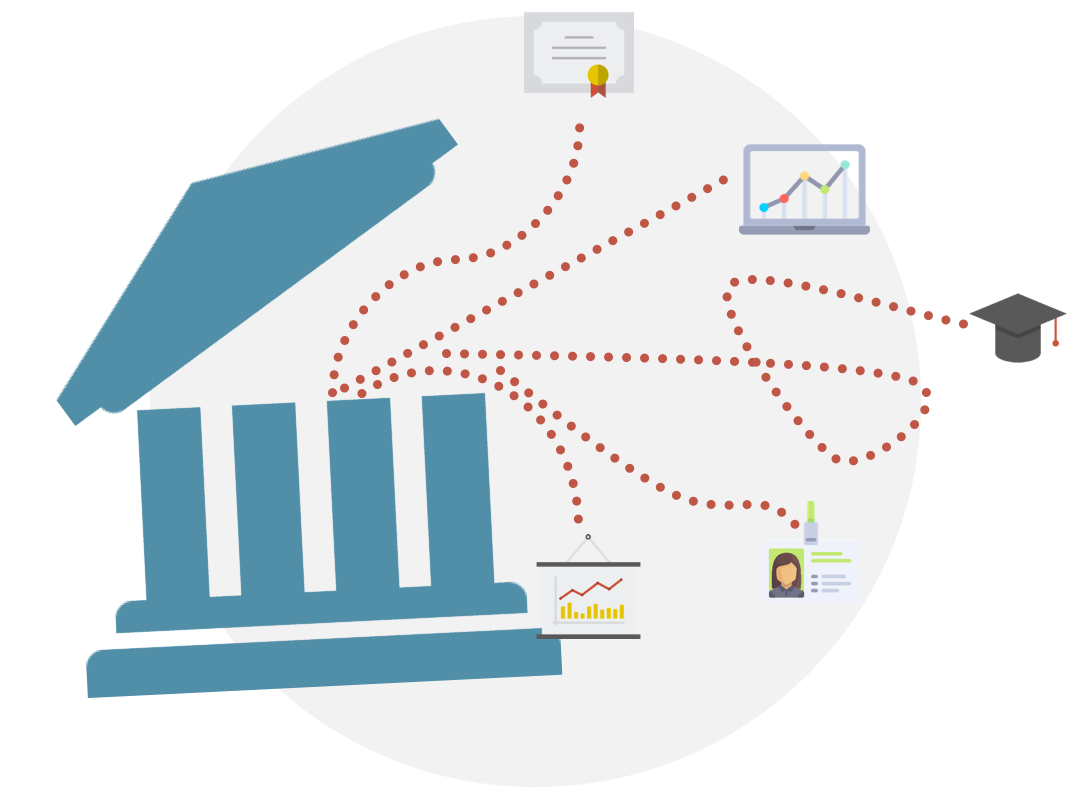 Since the dawn of MOOCs in 2012 innovators have been heralding the “unbundling” of the college degree. Our year-end blog seeks to look beyond the hype at individual examples of where traditional learning institutions are beginning to unbundle themselves. What counts as unbundling? In our blog, we refer to two mini-trends here: 1) signs that colleges are accepting the role as curators and validators of experiences and competencies rather than deliverers of the whole degree, and 2) where traditional colleges are losing out to new-style learning providers as a route to the white collar workforce. These are meant to be illustrative, not comprehensive.

1. Eastern Washington University partners with EdX to give Microsoft what it wants

Several new-style learning providers are showing up in traditional college course catalogs. For example, last year, Microsoft began sharing that it would be hiring numerous new employees with specializations in data analytics. Although several universities were interested in the opportunity, they were too slow to respond to Microsoft’s need. Instead, Microsoft partnered with EdX to offer a sort of “micro-degree” that could be quick, cheap, and agile in churning out prospective employees. Eastern Washington got into gear and approved a new major in a year, the fastest approval ever on their campus, according to this WIRED report. That major now has courses created with Microsoft and delivered by EdEx.

This design reflects the larger industry need for micro-degrees: the Computing Technology Industry Association projects that although 1.8 million new tech jobs will be created between 2014 and 2024, colleges will only be producing about 28,000 tech-related bachelor’s and Master’s degrees per year. In some cases, these platforms might still involve traditional universities, such as Coursera partnering with Santa Monica College to deliver courses for high-need jobs requested by Los Angeles County for subjects such as regional planning. Overall, online providers like Coursera already partner with more than 100 institutions to offer courses. While most appear to be for certificates, not college credit, they are delivering credit-bearing courses with a few online graduate programs, such as U of Illinois for business.

What to watch for in 2018: Look for more universities to embed “micro-degrees” inside full degrees. But also expect impatient employers to cut out the middle man, partnering with flexible providers who can move quickly. At the Lab, we call this trend “sponsored pathways.”  Universities can get in on the action, but they have to be fast and flexible. Colleges should embrace the role of curator.

2. IBM and Northeastern University blur the line between school and work

In a blog we published last month, we discussed how IBM and Northeastern University announced a partnership in three graduate programs, where IBM badges for employees can count for credit towards a graduate degree.  Robert McDonald, vice president for support transformation and training at IBM, described the value of the partnership to students and businesses: “To be successful in today’s workforce every one of us must be on a continuous learning path throughout our careers as virtually every profession is changing with the introduction of technologies like artificial intelligence and the cloud.” Kemi Jona, an associate dean at Northeastern, says IBM’s digital badge platform provides a new level of personalization and customization to connect learners with these opportunities at Northeastern at the point-of-need. In other words, the opportunities will come find the learners, not the other way around!”

BTW, Joseph Auon, president of Northeastern University, recently published “Robot-Proof: Higher Education in the Age of Artificial Intelligence,” so it’s no surprise Northeastern is cutting edge here. Lab advisor Jeff Selingo recently reviewed the book, lauding its three arguments for how colleges should change: by integrating social skills and technical skills, by investing in experiential learning, and by moving away from the 120-credit degree and toward a lifelong learning relationship between institution and student. The Economist recently profiled how this kind of transformation could have real economic imperatives.

What to watch for in 2018: More instances of employers partnering with graduate programs to offer credit for work-based competency development. This could happen in any hiring field where scarcity is an issue. The employers and grad schools are competing for candidates. An employee value proposition of lower cost credentials leading to promotion is a hot offering that will build loyalty.

After accounting for financial aid packages, art schools and conservatories account for 7 of the 10 most expensive colleges for students. MoGraph Mentor, an online motion graphics training program, has taken notice and is offering students an alternative. Michael Jones, the founder and CEO of MoGraph Mentor, left the traditional art school world to disrupt it. He wrote in an email to our Innovator Network, “Highly specialized skills (like being a digital artist or coder) just don’t make sense bundled into 120 credit hours. The speed of change in our field makes it almost unthinkable to attend a 4-year school and spend time taking psychology or Chinese studies (both important fields of study, but entirely ancillary to the key job skills).” He concludes, “10 years ago, with no other choices, doing a 120 credit hour track made sense. Today, it’s very hard to see it surviving in a field such as ours.” Although starting an alternative visual arts program was quite a risk, Michael has seen enrollment grow from 19 students four years ago to 150 per semester today, and likes to think his program can stay agile to meet employers’ latest needs.

What to watch for in 2018: More closures like Memphis Art college, which shuttered in October, but on the bright side, look for entrepreneurial players who are offering students a low-cost first set of competencies to get into the job market, e.g. General Assembly, with its $2800 part-time visual design course.

Several universities have begun to close their full-time, in-person MBA programs, including Virginia Tech, Wake Forest, and Simmons College. Last month, the University of Wisconsin took initial steps to close its program, but backed off when it received overwhelming pushback from faculty and alumni. The school’s dean, Anne Massey, had this to say on the dropped proposal: “We moved too quickly without the broad consultation and discussion that our stakeholders can and should expect. We will move forward with discussions on how to grow the undergraduate program and expand the graduate portfolio while simultaneously strengthening the full-time MBA experience.”

What to watch for in 2018:  Grad students generally dodged the bullet this month, when it looked like the Republican tax bill would include taxation of their unpaid teaching loads. Now, we’re recommending a careful research for micro-degree options to every student considering all but those professions requiring degree level licenses (e.g. medicine, law).  Think twice before buying the whole degree up front.  And if you are pursuing a humanities PhD for a teaching career, there may be some jobs, but read poignant tales of caution from profs like Nina Handler, who wrote a beautiful elegy in the Chronicle this month, Facing My Own Extinction.

Some argue colleges are becoming more career focused because parents are demanding more “ROI” (return on investment). But demographics of our student bodies have as much impact: The new majority of students are more likely to be older, have children, be financially independent, and be at or below the federal poverty line. This graphic from Higher Learning Advocates effectively illustrates. And these demographic shifts aren’t just changing the makeup of colleges, but also how colleges operate and what they offer; 40% of all colleges and universities are estimated to see declining enrollments for full-time students this year, 60% in the Midwest.  The “coming of age” small, private campuses are being hit the hardest.

What to watch for in 2018: Is support for higher ed fragmenting along political lines? It is if you believe the recent Pew poll showing Republicans’ distrust of higher ed is growing relative to Democrats (on a nearly 2-to-1 margin) is not fake news. (Case in point was last month’s editorial highlighting those who call colleges a place for “elitists, crybabies, and junky degrees.”) In any case, look for Trump’s Department of Education to push on the trend toward more “practical” vocational learning and not just apprenticeships. Higher Ed Act proposals this year may push to open up federal financial aid beyond the credit-hour.

Please send us your examples or counterexamples of the unbundling trend and what you are looking for in 2018. Happy holidays from all of us at the Lab!