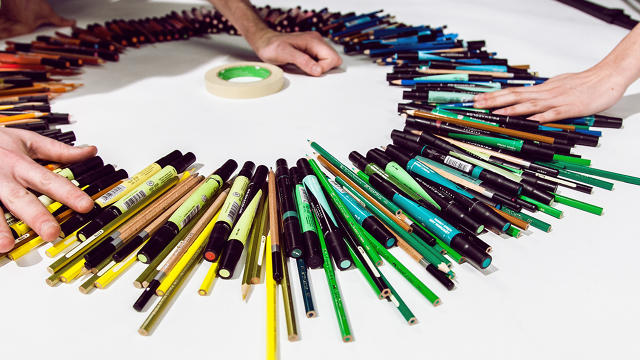 Design thinking is everywhere in the press these days. The practice has ties all the way back to DaVinci, but I only discovered it a little more recently, at Stanford’s “d.School.” Adopting it two years ago as the “home-court toolkit” for the Education Design Lab, we felt ahead of the curve.

But now we feel like design thinking is so hot, its star could burn out, and that would be a shame. The fast-paced but structured silo-busting process really lends itself to reinventing higher education for students and institutions for a couple of reasons. The article last week in The Chronicle of Higher Education “Is Design Thinking the New Liberal Arts?” put it well:

“What is design thinking? It’s an approach to problem solving based on a few easy-to-grasp principles that sound obvious: ‘Show Don’t Tell,’ ‘Focus on Human Values,’ ‘Craft Clarity,’ ‘Embrace Experimentation,’ ‘Mindful of Process,’ ‘Bias Toward Action,’ and ‘Radical Collaboration.’ These seven points reduce to five modes — empathize, define, ideate, prototype, test — and three headings: hear, create, deliver. That may sound corporate and even simplistic, but design thinking has been used to tackle issues like improving access to economic resources in Mongolia, water storage and transportation in India, and elementary and secondary education and community building in low-income neighborhoods in the United States.”

This article was about the concept of teaching design thinking skills to students as part of general education for the 21st century. It was followed by a story in Fast Company this week, “Stanford’s Most Popular Class Isn’t Computer Science…It’s Something Much More Important.” This piece high fived the fact that 17% of all seniors have signed up for “Designing Your Life,” which helps students prototype alternate life paths (note: not just career paths). Many students who couldn’t score a seat in the in-person class asked for bootleg sessions taught by luckier friends. What if every course could be that popular?

The aspirational but disciplined structure for design thinking also lends itself to bigger design challenges than life mapping as the forays into water policy and international aid suggest. Some of the most forward-leaning college presidents are embracing it as a strategic planning tool in these trying times for higher ed. Michael Crow just published a book called Designing The New American University, after presiding over Arizona State University’s unlikely ascendance to number two most innovative university in the U.S. (some proceeds of which funded some gleaming bricks and mortar expansion as well). In his book trailer, Crow asserts that his reinvention campaign is pioneering the design map for a new class of inclusive public universities focused on adaptive models in a complex world. “What we need are universities that are unbelievably creative and unbelievably dynamic in their issues of discovery.”

In a recent session where we, the Education Design Lab, were teaching design to administrators from 20 universities, Crow laid out his eight principles from his book, which included fusing intellectual disciplines, embedding the university in society and community, engaging globally, conducting use-inspired research and leveraging “place,” which is quickly coming to be code for “figure out how to justify your existence in an age where more and more courses might be available for free online.”

Just in my travels, I’ve come across others. Scott Cowen, recently retired and innovative president of Tulane University, who shepherded higher ed in New Orleans through the Katrina years, is standing up a design shop for his school and city. John Hennessy, president of Stanford, became a convert to design thinking as he watched his interdisciplinary “d.School” become a main event on campus and in the lives of his students. He told d.School and IDEO founder, David Kelley, that he wanted every Stanford grad to develop the skills that Kelley describes in his latest book, Creative Confidence.

OK, there is some hype building, which the academic community may rightfully question, but the design methods are legitimate in an ecosystem on hyper-speed.

Bias toward action? Check, because if you plan for a long time, circumstances will pass you by.

Radical collaboration? Check, because bedfellows, strange or familiar, are required for sharp pivots and capacity.

Focus on Human Values? Check, because millennials are teaching us all to be “authentic” in our schools’ value propositions and even our personal brands.

Embrace Experimentation? Check. In the hyper-speed world, there is not one right answer, there are possibilities, arrays, co-efficients, and prototypes to test and improve.

This is a world that requires flexing new muscles whether you are a student or a college president. Let’s hope that Stanford students are not the only ones with access to these 21st century skills.