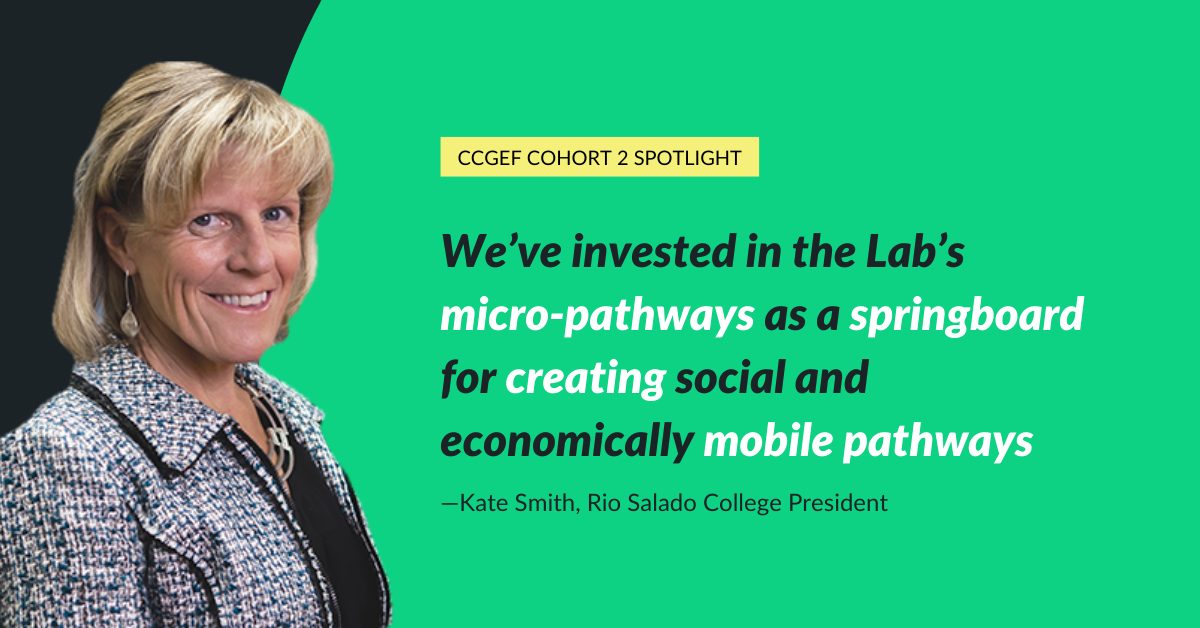 Rio Salado College (RSC) has historically been recognized as an innovative online education provider with flexible programming. Based in Tempe, Arizona, RSC is a relatively young two-year institution that opened its doors in 1978.

A Culture of Business and Education Collaboration with Flexible Programs

Beginning in 1990 under the presidency of Linda Thor, a position she held for 20 years, RSC built a business-oriented, collaborative culture focused on underrepresented learners. That culture included, by 1996 and through today, flexible, fully online, eight-week courses that students could enroll in every Monday instead of waiting an entire semester. In 2006, Thor wrote about RSC’s history under her leadership, noting the importance of building alliances with local employers that included offering easily accessible, short-term occupational certificate programs.

Co-designed with learners and employers, micro-pathways are two or more stackable credentials, including a 21st century skill micro-credential, that are flexibly delivered to be achieved within less than a year and result in a job at or above the local median wage.

“We’ve invested in the Lab’s micro-pathways as a springboard for creating social and economically mobile pathways,” said Rio Salado College President Kate Smith. “We’re creating pathways that can take individuals to prosperity through something that is short-term and accessible. It’s part of Rio’s core fabric. It’s in our DNA.”

Smith described RSC’s participation in the Fund as “a wonderful marriage focused on building a very intentional design structure, helping community colleges and industry partners come together and speak a common language — one that is often missing.” The Lab is bridging the two languages of industry and education through a structured approach “to work together with our industry partners to build very meaningful credentials and a pipeline for students to go right into the workforce in high-demand, high-need areas,” Smith added.

Being based in Maricopa County, with 27 growing towns and cities, including Phoenix, certainly helps that effort. The Phoenix Business Journal recently reported that “Maricopa County added more new residents than any county in the nation last year, continuing a trend that local officials call a credit to the region’s opportunities and affordability.” The U.S. Census Bureau, for instance, estimated that Maricopa County’s population grew by 76,020 people from April 2020 to July 2021, increasing its population to just under 4.5 million.

RSC’s Vice President of Strategy and Advancement Janelle Elias said that as Maricopa County grows, the institutions in the MCCCD increasingly collaborate between themselves and with local employers.

“That’s been a big part of our journey in the design process, leveraging the strengths and assets across our system and with local employers,” Elias said. “The East Valley region is one of the fastest growing areas in technology companies,” she added. “We jumped to number seven in the country over the past few years, and we saw a 6.2% increase in women working in technology. We started to see companies like GoDaddy, Intel, General Motors, and Google come to the valley.”

In addition, Elias points to data and research published by the Arizona Commerce Authority, showing that the state has grown to hosting 5,000 manufacturing establishments. The East Valley region now accommodates companies in “aerospace, defense, bioscience, optics, and photonics. They have come to the valley in ways that we have never seen before,” Elias explained.

The Lab assists the design process by guiding the Fund’s cohorts through a year-long effort driven by six milestone achievements that focus on human-centered design:

Lab Education Designer Elisabeth Fellowes explained that RSC is now working through milestones three and four of the micro-pathway design process, identifying skills needs with employer partners and prototyping the micro-pathways. Throughout this work, the team has been mapping the current ecosystem and processes that exist across the district in order to determine a system-level approach that streamlines the experience for employer partners and supports collaboration across the district.

“One of the key priorities is to conduct all of this work on a system level,” she said. After Cohort 2 completes the one-year design process, the Lab stays on for a second year with continued support. Following the second year, the Lab and Cohort 2 collects and analyzes impact data to understand the results of the entire project.

Follow the Community College Growth Engine Fund’s design journey by signing up for the Lab’s email newsletter. You can also explore 30+ micro-pathways from the first cohort on the Lab’s website. To get in touch, email our team at ccgef@eddesignlab.org.