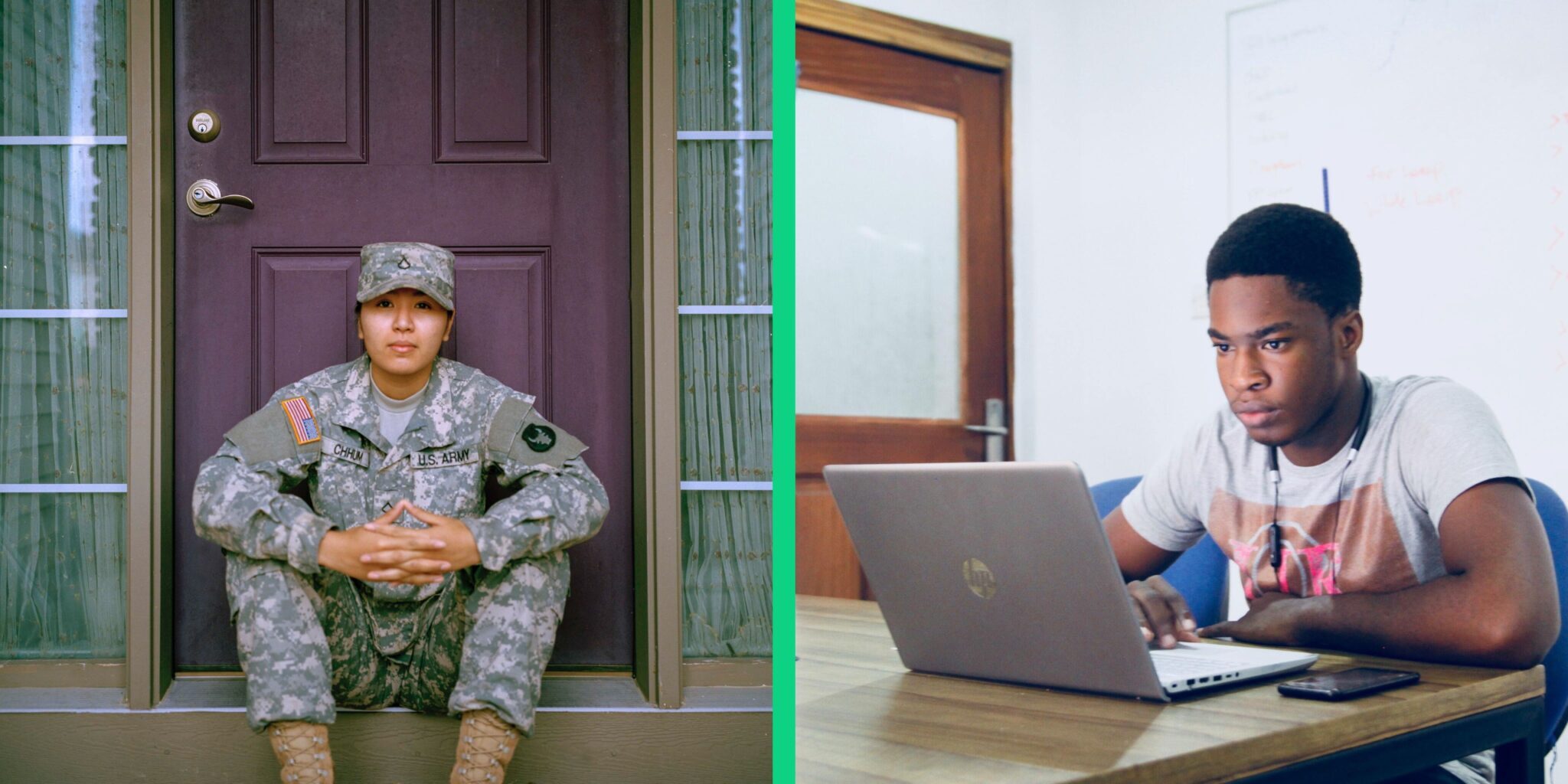 The XCredit, or “Experience Credit” initiative, seeks to validate in-demand skills so the credential-earner can showcase their skills to employers, indicate fit for job roles, and increase their economic mobility.

Rather than joining the Marines as an officer, as she was eligible to do with her bachelor’s degree, Ms. Parker instead opted to join as enlisted, knowing that experience would be valuable once she became an officer.

She also enlisted at age 24 with a degree and two years of teaching experience under her belt, while many of her incoming peers were joining right out of high school. One year after joining, Ms. Parker’s superiors, recognizing her talents, asked her to take over as Legal Chief for her regiment, in spite of the fact that, in her own words, “I had zero background or experience in it.”

Getting up to speed in this role was not easy, requiring a great deal of research and learning-by-doing, using a unique combination of 21st century skills such as initiative, resilience, and creative problem solving. Because of this, Ms. Parker notes, “I ended up thriving in that position and stayed there for almost two years before deploying.”

Fast forward about eight years. Ms. Parker is now in the civilian workforce and a few months into a new role. Unexpectedly, her team of seven was reduced to two, and as she puts it, “I was left to figure it out,” temporarily taking on the positions of four of her colleagues. That same combination of 21st century skills was again required, and Ms. Parker’s experience in the Marines — helping her rise to any challenge — guided her to success once again. She was promoted to manager shortly afterward.

While she was hired due to her resume, no one at the organization was aware of this hidden talent — a blend of 21st century skills — which enabled Ms. Parker to thrive within ambiguity, particularly when times were tough. She had no certificate, no credential which signaled this capability. In this way, Ms. Parker’s military story is absolutely “typical.” She developed a wealth of critical skills during her time in the Marines, primarily through on-the-job experience, yet had no tangible documentation of these skills, nothing she could put on a resume to signal her true value to potential employers.

Ms. Parker’s story of possessing a valuable hidden talent, cultivated outside the walls of a classroom and not formally credentialed, is an experience shared by many, both veteran and civilian. This might include a mother who develops excellent time-management skills caring for her children, an Uber driver who communicates effectively with others after years of practice, or a hospital corpsman in the Navy who cultivates deep empathy during his four years providing medical care to his fellow sailors. Although none of these individuals has a degree or certificate acknowledging these skills, they can lead to good jobs, especially for those who may be under- or unemployed.

And therein lies the challenge: Employers consistently report 21st century skills to be top priorities in hiring, yet many individuals have a hard time signaling their abilities and are therefore overlooked. They are often edged out for job roles by others with a degree, which employers routinely accept as a proxy for such skills. This phenomenon disproportionately impacts what we at the Lab refer to as “New Majority Learners”: those historically marginalized by the traditional model of higher education.

Without formal recognition for their skills, how can this mother, this Uber driver, or this veteran leverage their existing skills as currency for future opportunities?

An “XCredit” — or “Experience Credit” — is the value given to an individual’s existing skills.

With a distinguished group of technology partners, the Lab is prototyping next-generation 21st century skills assessments and identifying other “artifacts” individuals might possess which can serve as credible evidence of skills. We want to facilitate simple, open and low-cost ways for people, particularly transitioning military members, veterans, and unemployed and underemployed civilians, to validate their skills, earning credentials to signal these skills to prospective employers.

How is XCredit different than credit for prior learning (CPL) or PLA?

The XCredit concept shares some similarities with Prior Learning Assessment (PLA), which CAEL defines as “various methods that colleges, universities, and other education/training providers use to evaluate learning that has occurred outside of the traditional academic environment.” While the XCredit model does seek to capture and validate an individual’s prior learning and skills, it differs from the typical model of PLA in a few significant ways. First, PLA is often criticized for being overly subjective, manual, and time-consuming. Generally, each learner applying for PLA must submit some kind of evidence or artifact of learning, each of which is manually scored, one-by-one, with wide discrepancies in results among faculty evaluators. To overcome these challenges, the XCredit assessments will utilize authentic simulation, virtual reality, and extended reality technologies to automate scoring.

Another important distinction is that the process of earning credentials through XCredit exists entirely outside the college and university system. We seek not to offer college credit, applicable toward a degree or certificate program, but instead to validate in-demand skills so that the credential-earner can showcase their skills to employers, indicate fit for job roles, and increase their economic mobility. Because XCredit is not situated within a college or university, it is open to everyone, not just those enrolled at a higher ed institution.

We are not satisfied solely with open access, however. A core objective of the project, using open data standards, is to prototype an ecosystem of tools to seamlessly share data to make learners’ skills visible and shareable, while also providing the learner with ownership over their own records.

Education Design Lab is uniquely positioned to span these boundaries. We have been driving toward the skills-based economy for six years as part of a moral imperative, designing solutions and new learning models with over 135 institutions, 60 employers, and 50 organizations, all while keeping the needs of New Majority Learners at the center. Much of our work rests upon the Lab’s 21st century skills competency framework, co-designed with employers and colleges, which clearly articulates the transferable human skills needed for success in the future of work.

The automated XCredit assessments are being developed in tight alignment with this framework, ensuring their relevance in the labor market. The Lab also brings the right mix of talent to the work, with in-house expertise in data, interoperability, assessment, and competency-based education, as well as through strategic partnerships providing career navigation, assessment development, competency tracking, badging, and learning record management tools.

We at the Lab believe that giving value to work and life experience leads to confidence, hope, empowerment, and a career pathway — as well as a shorter distance to median wage income. No longer should individuals be turned away from roles they are qualified for, roles employers say they struggle to fill, simply because they do not have the right degree or pedigree.

Let’s honor the assets of Ms. Parker and others within a deep and diverse talent pool by giving credit, XCredit, where it’s due.

XCredit is an initiative led by Education Design Lab, with support from Walmart, and in partnership with Credly, Cypher Learning, Muzzy Lane, MyHub, SOLID, and Talespin.

Want to get involved?

Reach out to Dr. Tara Laughlin, Education Designer and Micro-Credentialing Project Manager at the Lab.