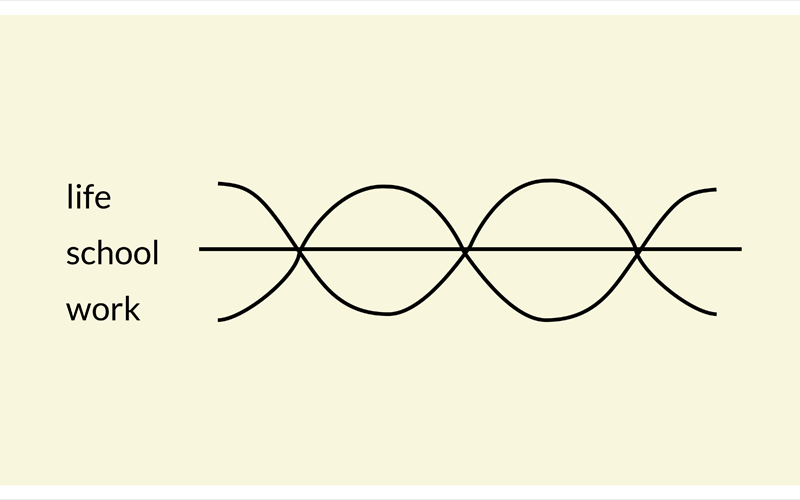 When we first predicted the “Learner Revolution” in 2014, we talked about it as a trend that might take hold by 2030. The Learner Revolution is a world where the college degree becomes just one option for professional career preparation, where learners might hack their own path to attain skills in shorter courses or micro-degrees. Their credentials might be delivered by a mix of colleges, employers, or experience providers at any point in their lives. By early 2019, to celebrate the Lab’s fifth anniversary, we wrote about how quickly public views on the importance of the college degree had softened as enrollments at two- and four-year colleges, and particularly graduate schools, were declining.

At the start of the new decade, experimentation and attitudes about new models to support the Learner Revolution are dialing up at an even quicker pace. We have identified six developments and trends to keep an eye on as we step into the 2020s.

With 7.4 million U.S. job openings in mid-2019, it’s no wonder employers are getting desperate not just for talent, but talent with skills of the future. Last July, Amazon made waves by pledging over $700 million to upskill more than 100,000 of its U.S. employees, expanding its “Cloud School” training to community colleges in northern California and the state of Virginia (after the announcement of the new headquarters in northern VA). The list of blue chip companies not requiring four-year degrees for professional roles got longer in 2019, with JPMorgan Chase Chairman and CEO Jamie Dimon penning a year-end piece in Fortune Magazine called The Future of Work is Skills, So Stop Worrying about Degrees.

At the other end of the spectrum, we see enterprising companies in many states taking matters into their own hands. We are impressed with Sundt Construction Company reaching out to Central Arizona College to co-design stackable pathways for heavy machine operators to move into construction management careers. Sundt couldn’t find the workers—now they’ve got 200+ learners in stackable short-term certification programs ready to work while they pursue an associate’s degree that articulates seamlessly to a bachelor’s from Northern Arizona University.

2.  Rise of “Education as an Employee Benefit”

They say talent is the new oil, a scarce and valuable resource, and increasingly, employers are providing “education as a benefit” to attract and retain employees. Some employers are approaching this benefit with the help of companies like Guild Education, which shot past a billion dollar valuation last November. Guild helps brand name companies like Chipotle, Disney, and Walmart curate education offerings for employees, tapping into federal or state tuition reimbursement programs.

Hot valuations can be more a sign of hype than reality, but this one signals that employers and employees are buying into “The Weave” model that we are helping colleges consider, making a bet that because 70% of all college learners are also working 15 hours or more, successful models will increasingly blur the lines between work and school, over a lifetime. While many groups are innovating in this space (InStride, Sunlight, Outset) the opportunity is still largely untapped; the 400,000 working adults Guild has helped represent just 3-5% of employees at their partnering companies.

“Within the decade, all but the most exclusive learning providers, old and new, will compete for students at the competency and experience level rather than at the degree level. That is the principal paradigm shift of the Learner Revolution.”

We made this statement in our 2019 white paper, and have been watching for signs that colleges or other learning providers are shifting their marketing to lead with workforce competencies, rather than degrees.

So far, we see a lot of four-year colleges pitching experiential learning, opportunities to solve real world problems, and efforts to translate the liberal arts degree. Many community colleges and some four-years are incorporating certifications, such as Google’s IT certification, right into coursework, but not many colleges are breaking out to market their best competency offerings beyond their own students.

Our favorite example of this is “Sneaker Essentials” school, a genius play by Fashion Institute of Technology to market a short-term program offering specific competencies to get hired into the hip world of footwear design. You can scroll through the videos graduates and wannabes post; many of them accentuate that the learners already have a college degree, but need different competencies to launch their dream career. Online competency courses—the sweet spot for providers like General Assembly for half of the last decade—have been retrofitting college graduates for careers in IT, digital marketing, and UX design. But, it’s newish to see slick offerings coming from colleges in competencies such as footwear design, like the “Sneaker Essentials” course sponsored by pop culture website Complex. The price tag for this course is $1,000, which seems reasonable if employment outcomes are well-established. But one accepted applicant, who calls himself Deadstock Quality on YouTube, resorted to a funding plea from his hospital room, underscoring that, as we start the new decade, federal financial aid does not cover a build-your-own-pathway “competency” approach to postsecondary education.

More than ever, learners today are embracing the do-it-yourself mindset and hacking together their education. A survey from Pearson found that 84% of learners look for more self-service education as they get older, looking for learning resources that are just-in-time and just-in-place. An organic support and guidance community, illustrated by this example from a Google IT certificate earner, has sprung up on YouTube, where learners are helping each other make sense of the proliferating choices. Massive open online courses (more popularly known as MOOCs) were heavily criticized for most of the last decade, but they continue to build as the backbone of the hacked competency pathway model. While college and university enrollments in the U.S. dropped the past eight straight years, over the same period, through 2018, total cumulative enrollments in MOOCs grew to 101 million. 2019’s most popular Coursera MOOC that learners completed: artificial intelligence.

And, for learners who need help hacking their own future, we particularly like models like this one of our own that is seeing early success with Goodwill San Antonio (San Antonio, TX). We are currently designing and managing a pilot with an advanced logistics certificate micro-pathway, co-designed with Alamo Colleges District and funded by Walmart, that embeds the Lab’s 21st Century Skills Badges to help incumbent workers build collaboration, creative problem solving, and resilience skills. Employees get time off the retail or warehouse floor to upskill.

5. Employers Are Coming to the Credential Translation Table

With more targeted, skills-based hiring on the rise, we’re starting to see evidence that employers are willing to hire based upon these one-off courses disconnected from the degree. In our own efforts to build proof points at the Lab, we asked dozens of employers last fall from our three BadgedToHire regions (San Jose, CA; Albuquerque, NM; and the state of Maine) which hiring tools they expect to leverage the most in the future (3-5 years out). The college degree didn’t make it into the top five, but digital micro-credentials did. And employers in the Chamber of Commerce Foundation’s T3 Innovation Network are translating job descriptions to be usable in the increasingly dominant search engines that they use to find candidates.

Another area we’re paying attention to: the movement in HR from talent management to talent experience platforms that give employers a way to share and track competency maps. This shift will allow employers to understand company-wide skills gaps and publish routes to promotion. For competencies to be a meaningful currency within an organization, they need to be broken down well beyond the degree level. Here’s a look at how some of these platforms think about displaying competencies (note, no sign of degrees). As 2019 neared its close, a leader in the talent experience marketplace, Degreed, acquired Adepto, a company that specializes in talent management for gigwork.

The more data we have on careers and credentials, the less dependent we are on the bachelor’s degree as a proxy. Where all pathways used to end with a bachelor’s or associate’s, we are beginning to have competency-level data that can tell a job seeker the precise skills they need for a specific role so they can “stop out” or try to combine the degree path and a better paying job. In 2019, we ramped up our use of market-level data to help colleges build “opportunity occupation” pathways, to borrow the phrase coined by the Federal Reserve Banks of Philadelphia and Cleveland in their report last spring. We’ll be doing a lot more of this work in 2020.

Of course, we are all concerned about too much data and too many sneaker schools pitching to learners. Credential Engine is tracking credentials for a national registry, their count doubled in just the last year, up to 738,000 discrete credentials. They have not tackled the difficult and important work of recommending “stacks” based on employer feedback or validation, yet. It’s hard for a nationwide directory to bite off that level of high quality social good, but we hope curation and employer validation platforms will emerge early in this next decade and not be owned by one of the big tech players. While they could scale quickly, we are concerned about privacy and transparency of data. One path to scale is to start at the city and state level. Colorado announced a holiday present for us all just before Christmas, am ambitious project called C-Lab, which gives us one model.

C-Lab’s employer, learning institution, and policy partners are testing the “learning economy protocol,” that is a map of all the competency types in the state of Colorado to leverage blockchain technology, which allows all existing units of learning (online courses, work experience, LMS data, all nodes in the graphic below) to connect to one another to help a learner tell their competency story via one package. 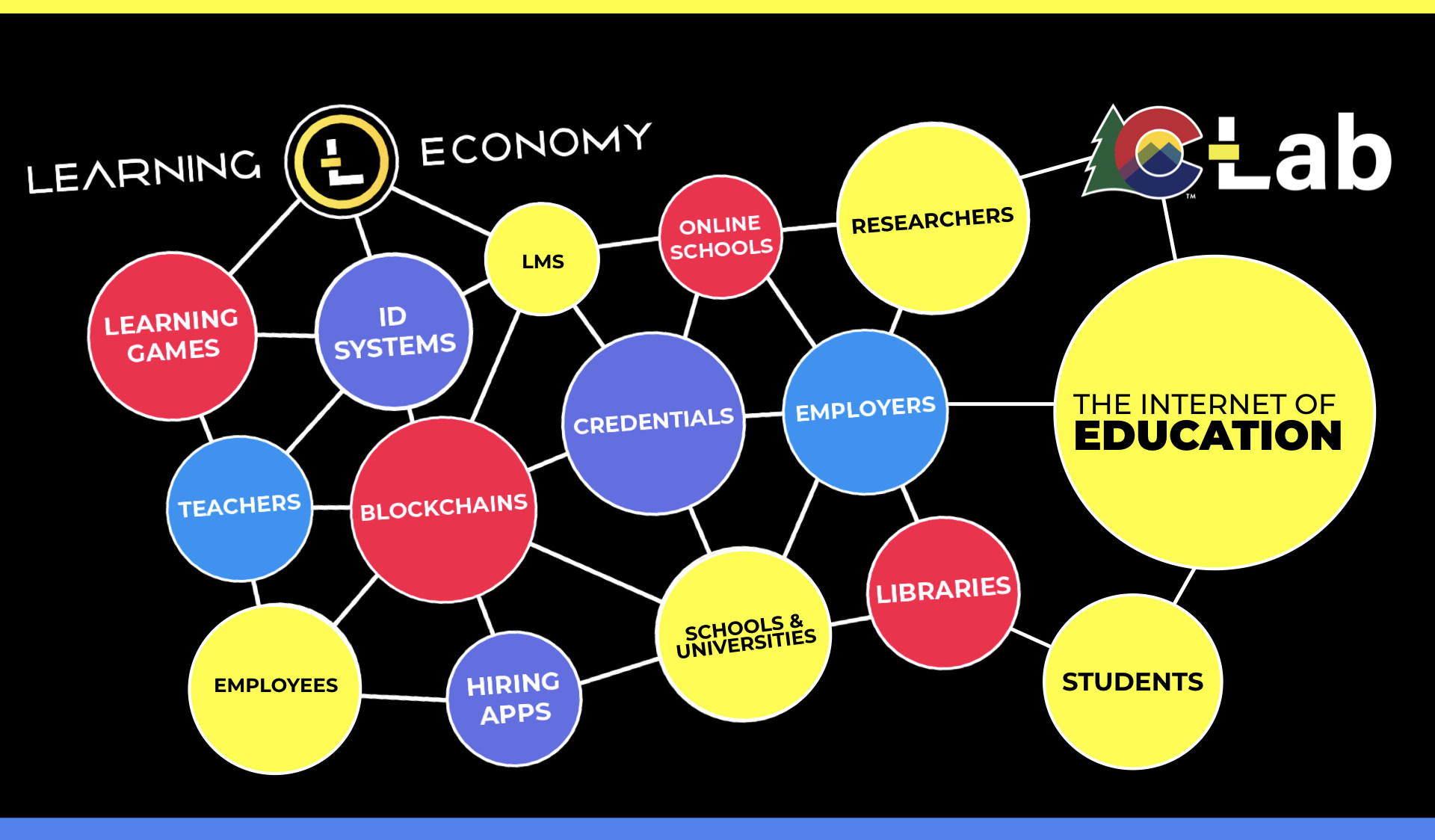 It’s a precursor to exciting work. Many players are working to develop a learner records “backpack,” where the learner owns and stores all of their records of competencies and certifications. For the Learner Revolution that we predicted five years ago, a self-sovereign tool to own and display your learning, from all parts of your life, where you can choose to make all or part of it digitally discoverable to increase your networks and opportunities, is essential. If we can get it right, it will help address the problems that the Lab was created to tackle: making learning more accessible, portable, visible, and relevant.