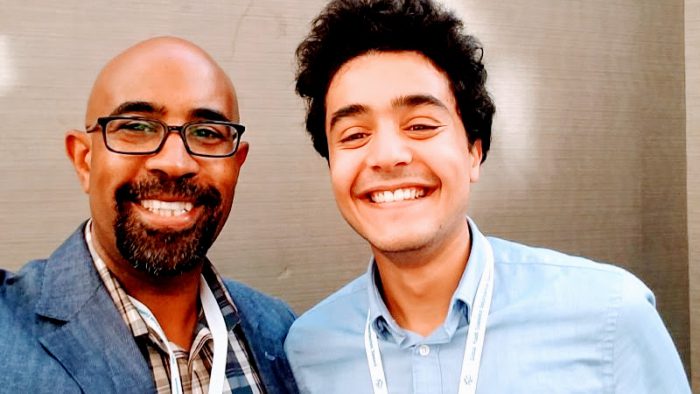 The Lab recently presented with Rachel Surkin of IREX (one of our partners in the co-design of the Oral Communication Badge) at the annual Global Youth Economic Opportunities Summit in Washington, D.C.  The featured session, entitled Beyond the Transcript: Capturing Credentials for the Workplace, was designed to demonstrate how two international institutions (Tunis Business School and Makerere University) were able to design a rigorous, integrated learning journey for students to earn a digital badge in oral communication.  The Lab and IREX were joined by Desy Osunsade, Director of Talent Acquisition and Diversity, who spoke candidly about how rigorous 21st century skill digital badges such as the oral communication badge add a critical and needed dimension to the applicant.  Houssem Ismail, a student from Tunis Business School (TBS) who earned the badge, was also a part of the presentation.

Listening to Houssem speak in front of an audience of 50+ global economic leaders, everyone was shocked to hear him describe himself as shy and introverted pre-oral communication badge. With such poise and self-awareness, he spoke about not the badge itself he had earned at TBS, but the skills he gained through intentionally practicing the art of oral communications in authentic ways.

He pointed to several specific instances where his learning experiences came into practice in real life. One key difference he noticed was his interviewing abilities. In an exercise to earn the badge, Houssem and his peers roleplayed different interview scenarios playing both the role of the interviewer and the interviewee. By playing the part of the interviewer, he became more fully aware of the importance of concise delivery. Houssem described this awareness as “a bell that would go off in his head” when he’s gone on for too long.

Once he landed the position, an internship with the British Council, another valuable skill he was able to practice was the far less formal ‘chit-chat’ that goes on in an office setting. Houssem shared how before earning the oral communications badge he didn’t feel he had the social skills to be successful at the internship. The side conversations in the workplace that occur in the cafeteria or break room, can go a long way for a young intern looking to bond and network with new colleagues. These skills, as Houssem noted are not innate for many young people.

In a side conversation with Hussem, he shared how as much as he was enjoying the messages of the keynote speakers at the conference, he found himself critiquing their storytelling capabilities–something he only did because he learned about and practiced storytelling as part of the badge earning experience.

When students are able to translate what they learned into their everyday experiences and become increasingly aware of their own oral communication skills (as well as others), then we know the badge is adding value beyond the traditional classroom experience.