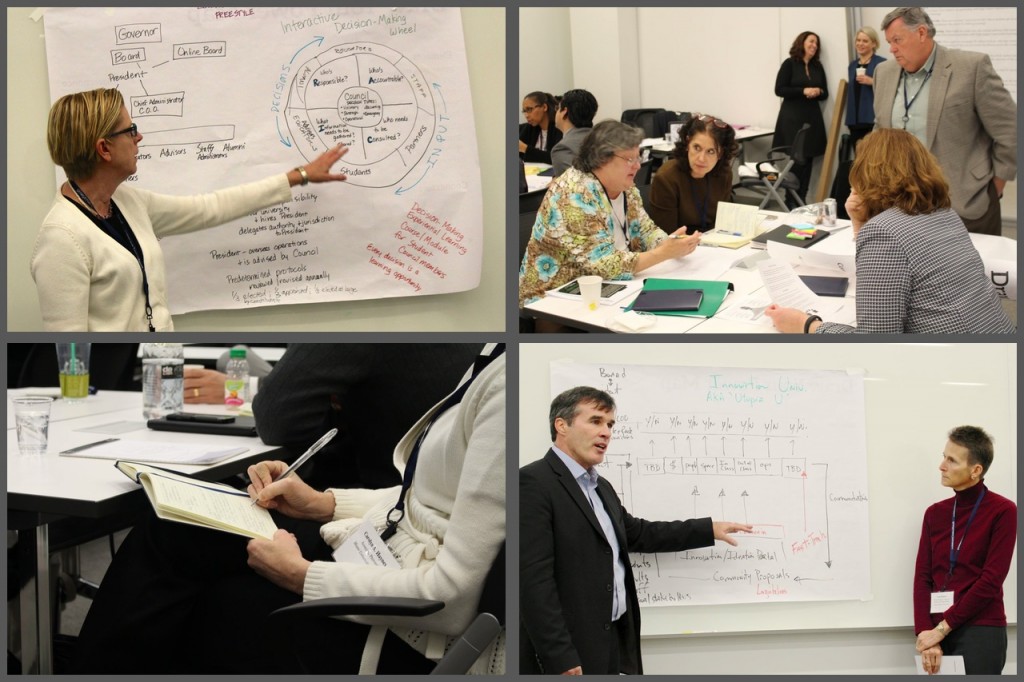 As we come near the close of a busy fall, we’d like to pause to reflect on some themes in this nuanced and interesting chapter of the “reinvent college” discussion. We were feeling a kind of frustration among universities and entrepreneurs, as VC investment is reported to be “cooling,” while hype about new companies, pilots, consumer appetite keeps pointing to new possibilities.

We commissioned an article to help crystalize, even for ourselves, the Lab’s and philanthropy’s role in the disruption of higher education. But perhaps more importantly, we want to have the vision conversation with others who are or want to be painting the picture of what is possible to benefit learners with this perfect storm of advances in learning science, data science, mobile, and consumer open-mindedness about the definition of a “learning institution.”

We unveiled the piece Nov. 12 during a panel I moderated at National Education Week. We had the audience (mostly entrepreneurs, investors, policy people) vote on which of the eight areas of opportunity hold the most promise for entrepreneurs inside or outside of existing learning institutions.

I was surprised by the answer. I picked “portability of credits,” given that future learners need to be able to earn credit from many experiences, classes and providers, and shape all that into a degree with the help of some kind of super coach who is beholden to learners rather than schools. Only one person in the audience agreed with me. I later learned he was from Parchment, an interesting company working on portable transcripts.

The biggest vote getter was experiential learning labs, which excite me enormously, but won’t be the student success accelerator a scalable, learner-centered coaching system or transparent and easily transferrable credit system might be. Although figuring out a way to credential, even on a traditional campus, the 95% of learning that happens outside a classroom is also a key hurdle for providers.

The next day, we had the opportunity to teach design thinking with a really smart group of higher education administrators (some are also faculty) through the new ASU/Georgetown University Academy for Higher Ed Leadership.

24 higher ed administration leaders raised their hands (along with their institutions) to join the inaugural cohort to think personally about transforming their models. They voted on which year-long design challenge was most compelling for them and the top choice was designing a system to harness data in useful ways to run their campuses. But a close second was rethinking courses to include experiential learning labs. Further discussion lead the cohort to choose design challenges associated with each module over a single, year-long project.

For last week’s module (the cohort will attend four modules throughout the year), our three-day challenge was to design a governance and organization structure for a new university. The Lab, consistent with most approaches to good design, places a great deal of emphasis on design question framing and reframing. During the framing exercise, the question emerged as: How might we design an agile and interactive decision making process to effect constructive, strategic choices and change?

Seeing the cohort’s prototype presentations this weekend really cheered me up about the strategic innovation talent inside universities. Their ability to express their passion and talent depends on designing safe spaces for institutional innovation into universities, We just have to figure out how to free them from what stands in their way and serve up innovation tools and partners through more effective means than the current fire hose.